A Collection in Two Acts 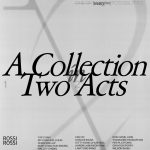 A Collection in Two Acts opens on July 16 through September 16 at Rossi & Rossi Hong Kong. Curated by Chris Wan, the exhibition utilises the private collection of Yuri van der Leest to present two frameworks of collectorship: one is institutional, such as museums and archives — treating artworks as files to be dealt with under a given context of art history; the other is personal, like a private collection built with artworks as repositories of memories and personal encounters. Through the use of critical fabulation, the two modes of art collecting are juxtaposed to raise a question about the structure and agency in the art system. ‍

Critical fabulation, coined by Saidiya Hartman in her essay Venus in Two Acts, means a semi-fictional and semi-true fabulated narrative. Drawing reference from this concept, Collection in Two Acts fabulates two art-collecting subjects by dividing the gallery into two exhibition halls, and displaying artworks collected by van der Leest over the past seven years in two disparate formats. The display of Hall 1 invokes a sense of public organisations, where art is collected for exhibition, educational, and research purposes to offer narratives about the past and present. Exhibits are aligned with their finishing date, each with their annotation — however, in addition to rigidly formatted information about titles and medium, artists’ own writings are included in the published material. By introducing the human component to the documentation of art, artists are given more autonomy to how their works are archived. The current method of documentation is thus questioned: has the power of institutions superseded the individual? Who is the subject in history?

Hall 2, on the other hand, depicts a private collection with subjective and personal inclination. The ostensibly arbitrary and unmethodical arrangement of works implies the intimacy of a living space. Congruent to the display style, the collector’s presence is reinforced with texts by van der Leest, written in response to the works clustered around. With these first-person accounts detailing his experiences with his collection, visitors find a passage into the consciousness of a collector. It is the layers of consideration that draw a difference between art collection and hoarding, and if no evaluation is made beyond the act of buying, the practice of collecting is only a reflection of personal taste and instinct.

The formats of Hall 1 and 2 signal two different collectorships and aim to evoke different psychological distances. Such discrepancy can hardly be neglected as one traverses the two spaces, and it assigns the works of each hall unique ways of viewing. Using the rhetoric of placement and display, the curator contrasts two atmospheres in one single exhibition to make the behind-the-scenes perceivable. The two acts of this exhibition, when taken as a whole, presents a panorama of the art ecosystem – the display indicates a conventional development of collection where one artwork moves from the intimate personal space of a collector’s home to being archived within an institution or museum setting. Yet upon closer inspection, one can find a myriad of decisions made by different parties hidden within this process.  Mainly defined by the practices of buying, collecting, exhibiting and archiving, this exhibition invites viewers to look at these power mechanisms and think about their effects on the art ecosystem.