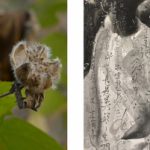 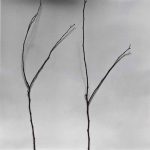 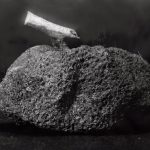 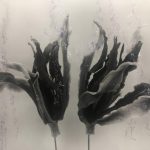 Alisan Fine Arts is pleased to announce the second solo exhibition Awakening for Chu Chu, a well-known emerging Chinese cross-disciplinary female artist. Inspired by Chinese philosophy, classical literature and Chinese solar terms, the works on display combine photography, calligraphy and painting. Spanning Chu’s career to date, they include her early B/W series of dried fruits and tree branches permeated with her contemplation about daily objects as well as her latest photography-calligraphy works tinted with delicate colours. By merging her flowing calligraphic text into images with different landscapes and nature, Chu presents a poetic space where virtual and reality alternate and converge.

Chu Chu graduated from the Department of oil painting at the China Academy of Art, Hangzhou and has further obtained her MFA in new media and PhD in calligraphy under the tutelage of the famed calligrapher Wang Donglin. Her diverse academic background covering traditional and modern media has led to her unique artistic language. By showcasing the various series of works from 2007 to 2022, the exhibition traces the different stages of Chu’s artistic development and highlights her ever-changing talent. The combination of different art forms and overlapping techniques reveals the contemporary facet of brush and ink, giving viewers insight and clues into the artist’s daily calligraphic practice as well as her in-depth knowledge of Chinese culture and history. In addition to showcasing her earlier series “Material Immaterial” from 2011, which presents ordinary found objects in nature such as gardenias, newer series include “Seventy-two Pentads”, which represents the subtle change of weather according to the solar system in ancient China; and “Ten Days of Spring”, focusing on the shadows of trees intertwined with calligraphy and pastel colours. However, the highlight of the exhibition are works from the “Bright Stars” series with the latest images created during the pandemic. The position of calligraphic text is shifted from ornamenting the photos to a more independent subject matter. Superimposing cursive calligraphy in unprecedented bright colours on photos of plants found near Lake Xihu, these works depart greatly from her usual black-and-white vocabulary. Her ode to the dynamic colours shows the artist’s renewed optimism after the challenges of the pandemic. Under her constant experimental practice, her creation using contrasting colours and overlapping cursive calligraphy has made the text and the images of the original photos almost illegible, forming a visual sense of the intertwining of classical and modernity. Under the surface of bold colours and lines, the connotations about the mutuality of mankind and nature and the transformation of calligraphy are worth noting.

As the art critic Professor Xia Kejun said, by presenting photographic images with brush and ink together, Chu Chu’s cross-media works provide a “profound touch of multi-dimensional space, which helps us reflect on a technological age, how we rebuild the induction of humanity and nature again.”

The title Awakening originates from the description of “Beginning of Spring”, the first of 24 solar terms in ancient China, which states that “the beginning of spring, when the wind thaws, the hibernating insects awaken, and the fishes swim upward near ice.” In particular, Awakening symbolizes the rejuvenation of the earth and the recovery of all things, foreshadowing new possibilities in 2023. Through this exhibition Alisan and Chu Chu would like to wish the audience an auspicious start to the new year.

Chu Chu is an accomplished ink painter, calligrapher, photographer, and oil painter. She is currently the Vice Secretary of Lanting Calligraphy Society and the Vice President of Zhejiang female Calligraphers Association in Hangzhou. She was born in 1975 in Hangzhou and graduated from the Department of oil painting at the China Academy of Art, Hangzhou in 2000, where she also received her MFA in new media in 2007 and in 2015 attained her PhD, in calligraphy under the tutelage of Wang Dongling. Since then, the artist has devoted herself to ink painting and seeks to incorporate this art form with photography and calligraphy. She has received several prestigious awards since 2000 including the Shiseido Prize of Best Female Photographer, the Three Shadows Photography Award, Beijing, 2011; Yearly Cutting-edge Photographer, selected by www.xitek.com, Beijing, 2010; Creative Award of New Media, China Academy of Art, Hangzhou, 2006; Excellent Works Award, New Century Oil Painting Exhibition, Hangzhou, 2001; Excellent Works Award, Zhao Mengfu Prize, National Painting Competition, China, 2000.

Alisan Fine Arts first showcased her works in Beyond the Jade Terrace in 2014 and have since held her first solo show in Hong Kong in 2017. We also exhibited her works in Ink Asia 2015; Art Basel Hong Kong 2016/17/19; Taipei Dangdai 2020 with great success.