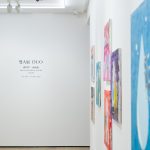 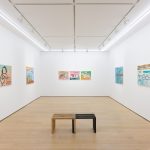 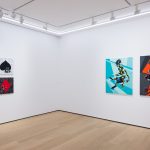 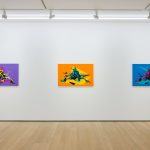 (29 October 2022, Hong Kong) Whitestone Gallery H Queen’s is honored to present the duo exhibition of artists Morita Manabu by WOOD and Yuyelai at Whitestone’s gallery space in Hong Kong. With the cutting edge and forceful narration of the former, and the organic and mellow tone of the latter, the two artists of the new generation opened up a new conversation and demonstrated a newborn geometry, bringing imagination and vitality to the viewers.

Morita Manabu by WOOD (b.1986) depicts a virtual world with playful styles and street art’s sense of velocity that give the viewers a feeling of freedom. With variety in multi-layered media, his canvas works attract the viewers with a Neo-futurism aesthetic by evoking layers in the animation production process. His stereoscopic metallic work looks as if the moment of birth were scooped out by a sharp-edged tool, emitting a swinging time-axis. The artist reconsiders and contemplates human emotions and values by observing the world from the eyes of the only resident in his imaginary universe, an artificial intelligence called NEO, and his adventure in solitude. The cartoon-like interpretation is inspired by his enormous consumption of animations and manga (Japanese comics) from his childhood. The world of Morita is impressive for its freedom from the confines of the medium, which reflects his exquisite freestyle of life. From street cultural brands like NIKE and atmos to luxury brands like MONCLER and Rolls-Royce, his art has substantially impacted various fields of audiences and received greater attention as an artist in the years to come.

Yuyelai (b.1999) started her artistic journey from the intrinsic ‘animal nature’ in humankind. Her magnificent interpretation of the world named ‘Human in Animal’ has interrogated humans’ ‘raison d’être’ ’(reason for existence) by deconstructing their existing position. Her paintings share the theme of ‘animality inside humans’ and illustrate ephemeral imaginary landscapes where humans and animals meet and interact. Yuyelai irresistibly longs for the state before humans have endowed humanity. Her gaze is pouring into the very moment of the birth of human beings, questioning their original state and true nature before being baptized by the name of ‘society’. The artist has been practicing calligraphy and seal carving since a young age and that contributed to the adaptation of  traditional Chinese ink-like fluid lines and watermarks in her works. The recurring rain-dripping layers on the canvas externalize Yuyelai’s aloof, poetic, rhapsodical expression, which incessantly brings the audience a feeling of undiscovered nostalgia.

The two young and emerging artists have been actively engaged in exhibitions and awards in Asia. Whitestone Gallery is enthusiastic to present to you the Neo-Nostalgia world in our Hong Kong H Queen’s space.

Whitestone Gallery is open from Tuesday to Saturday, 11 am to 7 pm

(Sunday by appointment only, closed on Monday and public holidays)