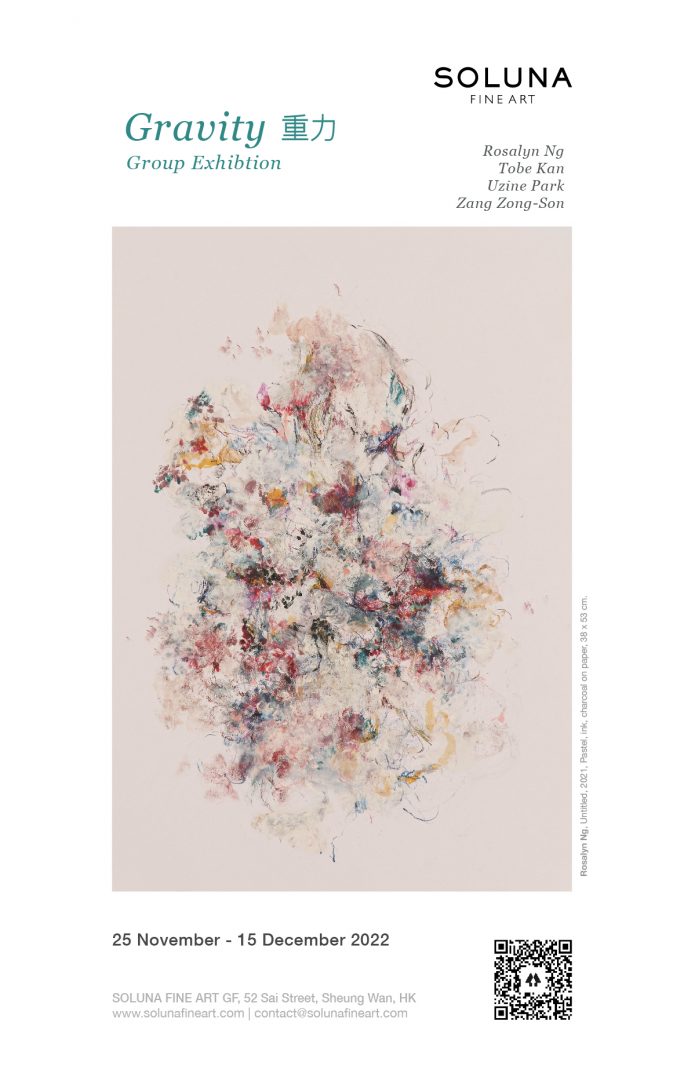 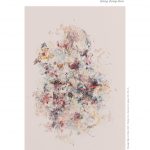 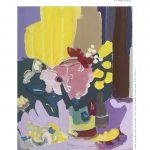 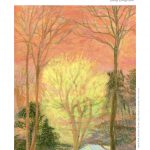 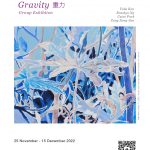 Soluna Fine Art is proud to present a group exhibition, ‘Gravity’, with four artists based in Hong Kong and the Netherlands, including Rosalyn Ng, Tobe Kan, Uzine Park, and Zang Zong-Son. The exhibition will showcase a group of paintings and mixed media drawings of botany, still life, and landscapes that oscillate between abstraction-figuration, portraying liminal space between the mind and the physical world. ‘Gravity’ will be on view from 25 November to 15 December, with an opening on 24 November (Thursday), 2022.

“I dreamed I was a butterfly, flitting around in the sky; then I awoke. Now I wonder: Am I a man who dreamt of being a butterfly, or am I a butterfly dreaming that I am a man?.”

Zhuangzi (Chuang-tzu; 莊子)
The Butterfly as Companion: Meditations on the First Three Chapters of the Chuang-Tzu, 369 BCE to 286 BCE
<Paraphrased from the original version>

The butterfly dream parable by Chinese philosopher Zhuangzi has deep roots in Taoist thoughts toward defining reality versus illusion, explaining that our awareness of happy existence and self-contentment can consciously transform the fixed reality. However, nature, the living system, is not free from chaos—when unpredictable plagues and earthquakes emerge catastrophically outside of our control. A butterfly, an organism most robbed of the power to inflict pain on others, cannot be romanticized for its only delightful aspects without considering its ephemeral life cycles of instability.

Precisely is why the concept of gravity may alleviate our perception of reality. Gravity is the fundamental life force that keeps all opposing principles shaping the environment into one seemingly orderly blueprint. The exhibited works are also portraying botany, flowers, trees, and landscapes composed of interdependent colors, lines, and shapes. However, although the viewers may expect to feel like they are looking at pristine and paradisal French impressionist landscapes, they also discover the deformation and erasure of visual properties that relate to the raw truth about nature.

‘Gravity 重力’ is an exhibition about human intuition that guides us to search for an alternate understanding of reality, like the viewers who envision the colors and forms as harmoniously balanced and conflicting at the same time when looking at the works.

The irony between spontaneous yet lyrical aspects of Rosalyn Ng‘s (b. 1993 in Hong kong) works are often due to her experiencing yearning for the ideal and freedom during the creative process. However, her visualizations of ‘ideal’ forms on the canvas often contradict herself, resulting in recalibration of her beliefs, fears, and desires.

The mystic-blue botanical paintings by Tobe Kan (b.1984 in Hong Kong) allude to the complicated existence of humanity between the boundaries of life and death. Apart from embodying the human conditions of fragility, plants are also the projection of an otherworldly realm. While Tobe’s primary usage of blue palettes signifies birth and a new beginning, there is also a sense of disconnection and dissonance in the obscured background.

Uzine Park‘s (b. 1977 in South Korea) landscape paintings comprise painterly swooshes of colors highlighting the seasonal atmosphere and conditions of weather. Although vast expanses of the skies and trees appear murky and, at times, even catastrophic, Park’s subtle pictorial representations of the roofed house draws the viewers into the safety of consciousness.

Zang Zong-Son’s (b. 1965 in South Korea) still-life paintings deconstruct the subjects by searching for perspectives where the light shines in both literal and metaphorical manners. She believes that beneath the ambiguous surface of mundane objects and close friends exist hidden notions, more like unique aura, that radiate during ordinary yet beautiful moments in life.

While imagery and representations nested within real space and time bind the viewers to the physical world, the defamiliarizing and estranging aspects free the viewers from identification with material forms. The metaphysical properties of colors and forms connect them with the inner subconscious towards the state of ‘flow’. This describes our most authentic and intuitive state that searches for an alternate reality, and as such, the ideal.

The state of ‘flow’ is similar to the metamorphosis of evolutionary progress, a human development. We experience much of our positive emotions in relation to how we see ourselves progressing towards goals. We continuously search for those ideals while painting and viewing the art, whether they exist in reality or imagination, are attainable or not, or cause suffering in the process. Since otherwise, it is certain we will never feel that our life has meaning.

Rosalyn Ng (b. 1993 in Hong Kong) graduated from Chelsea College of Art, London, with a major in Fine Art in 2015. Rosalyn’s works translate nascent emotions into organic mark-making expressions. While she is involved in the active creation process, her purpose lies in captivating the viewers through multidimensional layers of bold colors and textures. Despite the seemingly spontaneous placements of colors and forms, her paintings allude to imaginary scenes, which lead to invoking a blend of complicated, mixed feelings of bitterness and sweetness in viewers. This irony between spontaneity and imagination may perhaps be due to her artistic practice of constantly experiencing yearning for the ‘ideal’ combined with the exploration of freedom. However, her ‘ideal’ forms in the canvas often contradict herself, resulting in recalibrations of her core beliefs, fears, and desires during the creative process. After graduation, Rosalyn has been diligently committed to her artistic practice by developing different styles and obtaining formal education in art criticism. Her works have been exhibited in London, Amsterdam, and Hong Kong from several online to offline exhibitions and publications, including an upcoming feature in Floorr Magazine from London. She recently completed her first solo exhibition ‘Lonely Island’ in YueJin Art Museum in Taiwan in 2022.

Tobe Kan (b.1984 in Hong Kong) currently lives and works in Hong Kong. She obtained a Bachelor (Fine Art) degree co-presented by RMIT University and Hong Kong Art School in 2017. In recent years, Tobe has been interested in observing the various vegetation that coexists with humans when walking around. Her current practice investigates the boundaries between life and death, which examines the condition of insecurity concerning feelings of alienation and being forgotten and distant together with “existence.” Furthermore, the mystic-blue botanical paintings reveal the uncanny and mysterious feelings of hovering between asleep and awake, dream and reality. Tobe experiments with a broad range of paintings, drawings, and installations, and her artworks are kept in numerous private collections.

Uzine Park (b. 1977 in Seoul, South Korea) grew up in Seoul, in the late ‘70s and earned both B.A. and M.F.A. at Hongik University before moving to the Netherlands to receive her Masters. Inspired by the vast landscapes and lush vegetation in two distinct habits, Park often integrates emotive swooshes of colors highlighting the seasonal atmosphere and conditions of weather. They appear pristine and paradisal, and sometimes even catastrophic due to the dynamic interactions between colors and shapes. However, there is always a subtle pictorial representation, such as a roofed house, which draws the viewers into the safety of consciousness. Throughout Park’s career, she has been in a number of solo and group exhibitions in South Korea and the Netherlands. She also lectured on topics ranging from painting to upcycle fabric at Hongik University, Seoul National Education University, and Seoul Arts Center Children art Academy.

Zang Zong-Son (b. 1965) was born in Korea and graduated from Yonsei University and lived in London, Singapore, and Seoul. Based in Hong Kong since 2004, Zang’s nomadic way of living in her earlier years ignited a yearning for a sense of belonging, which she ultimately found in the world of painting. In 2007, she started to explore the medium of painting through overseas painting workshops in Europe and the United States. As a perceptual painter, she observes daily life scenes, objects, people, and locations in her neighborhood, and translates them into abstract still-life paintings. She deconstructs the subjects by searching for the perspective where light and unique aura are radiating, in both literal and metaphorical manner, and asks the viewers to look between the imagery and representation beneath the fragmented surfaces.  She believes that he mundane objects or close friends, such ordinary yet beautiful events of life radiate unique aura and luminescence; and thus, Zang’s abstract landscape paintings and portrait works encapsulate its history and her emotional and physical response to it.

Soluna Fine Art is a gallery specializing in Asian fine art and objects with deep roots in South Korea. Our mission is to revitalize interest in Eastern aesthetics and philosophy by showcasing established and emerging artists and works of traditional value with contemporary interpretation. Works by artists represented by Soluna Fine Art can be found in private collections and institutions around the world. As well as exhibitions, our annual programme includes fairs, educational initiatives and multi-disciplinary collaborations on an international level.