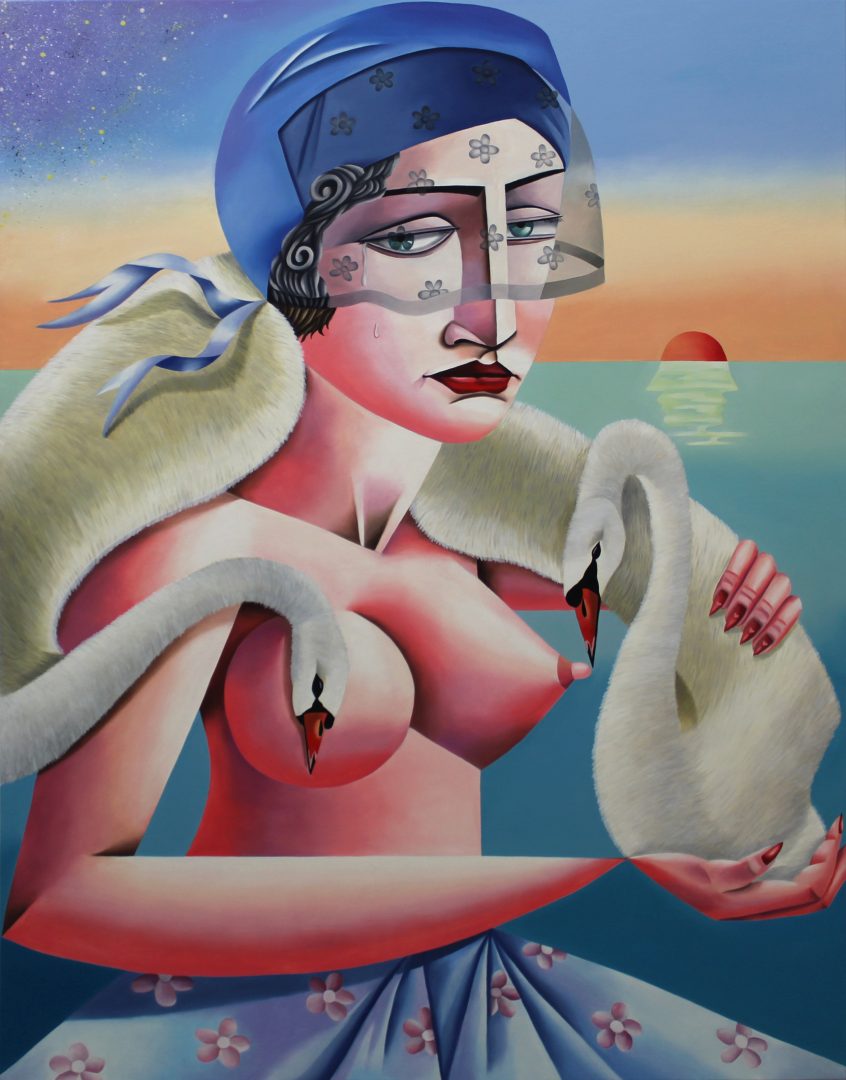 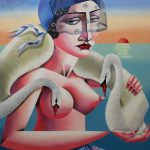 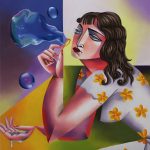 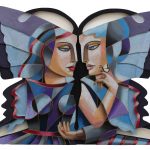 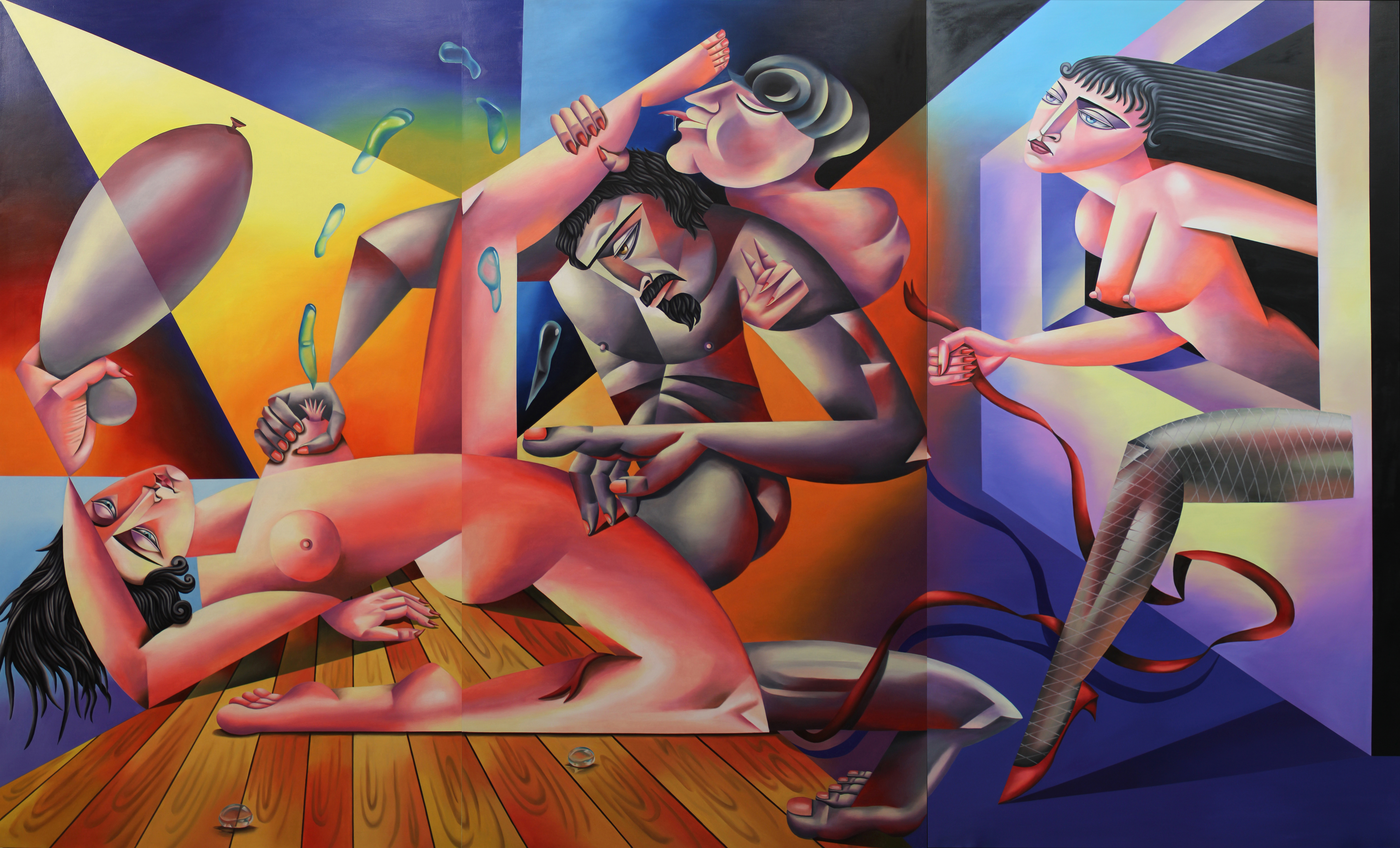 “GUSH” stems from Ng’s belief that water is the source of life. The title of the show brings to mind the various forms of water: tears, bodily fluids, bodies of water, clouds, and rain. Water is infinitely changeable, existing within all things as an indispensable part of bodies and nature, but water’s relationship with human bodies and natural things is also quite fluid. “GUSH” evokes a geyser, a thermal spring, or a vital energy secretly stored until it suddenly bursts forth. It also conjures the outpouring of human emotion from the depths of the soul. Through narrative depictions of figures, Ng controls a profusion of myths, histories, and realities, seeing cosmological relationships and human emotional layers from the inside out. “GUSH” is a phenomenon, an open emotion, an organ-less body; it finds freedom in constant generation and flows.

Ng’s paintings are a distillation of Fauvism, Cubism, and Surrealism; primitive and contemporary visual beauty overflow onto her canvases. She focuses on the body, seeking out ideal human emotions, the entanglements and collisions between figures, and the multi-dimensional and complex perceptual experience of intimacy and estrangement. In this way, she opens up a humorous, contradictory, passionate, and subtle mode of artistic expression. The friction between reality and fantasy evokes an intoxicating development of the self, or a way to handle a disjunction, a differentiated other. It could be self-destructive, but it also implies the possibility of redemption. Interactions between the figures serve as a kind of psychological and intellectual training that guides our way of looking and experiencing the paintings.

She excels at breaking up her images with color. Her intuition for color has a Symbolist flair, and the flattened bodies are permeated with a Constructivist sensibility. She creates romantic images with these strange, distorted bodies, details buried in Easter eggs, and an obviously mystical yet contradictory atmosphere. When painting alone was insufficient to fully express Ng’s ideas, woodcut prints became another option for her. Carving gives line a greater level of complexity, and this kind of boundless creation brings the viewer further into the visual world she has meticulously arranged. Ng mentioned that, during a 2016 trip to Central Asia, she was influenced by the surrealist and utopian mosaics of Kazakhstan, Azerbaijan, and Georgia. Their bright colors were reminiscent of a colorful kaleidoscope of straight lines, circles, angles, and large blocks of color. They invoked movement, speed, light, and power. These impressions have continued to shape her visual world.

Her work contains an interrogation and exploration of gender. She believes that gender is a game akin to cosplay, in which roles and identities are fluid and changeable. The largest work in the show is a triptych entitled Milkshake of Love, inspired by the bound women in the milk bar from Stanley Kubrick’s A Clockwork Orange. These women are not flesh and blood; they are plastic figurines that have been industrially produced. In The Lost Souls, the work is structured around a central star that cuts the painting into different sections. Its light shines toward the horizon, separating the road from the sky. The pairs of ants, monolithic monuments, and pieces of fruit also symbolize the attenuation of gender roles; they fuse into a single entity, and after it dissolves like fog or mist, the body is reborn. This is not simply about libido; through symbols full of binaries and contradictions, she moves forward in the search for an ideal Self. In Discipline and Punish, Michel Foucault points out that the body is a vehicle for subjective consciousness molded by power. By challenging what is “normal” and “natural,” we can appreciate the intense ruptures and the reconstructed, rationalized liberation in Jade Ching-yuk Ng’s work.