Lime & Tangerine in a Wormhole 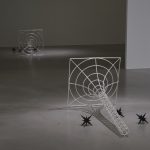 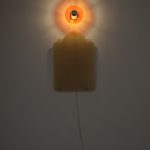 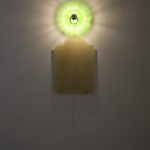 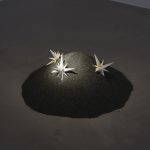 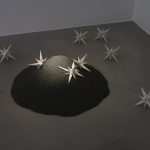 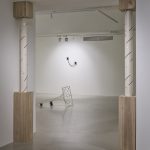 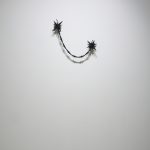 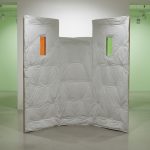 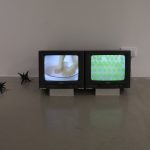 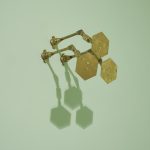 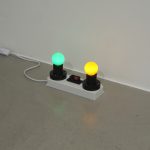 For Chan, the show’s centerpiece Distant Worlds (2022) embraces the understanding and investigation of the notion of parallelism. Comprising an identical pair of irregularly cylindrical stainless-steel objects placed on the floor, the work is based on the embedding diagram of a wormhole, which renders this hypothetical structure as a tunnel connecting disparate regions in space–time. Each resembling a halved tunnel, the two parts of the sculpture allude to the myriad possibilities of inter- and intra-connectivity among different and fluctuating realities. Situated at the center of the gallery with a distance between its two parts, the work transforms the space into an ambiguous point of intersection spanning two indefinite universes, where the viewers may discover the dual dimensions of all beings.

Throughout the exhibition, colors are coupled and juxtaposed to interweave imagery about the past and the future, the personal and the collective. From the tinted light filters in Cosmic Rays I and II (both 2022) to the colored bulbs in Ambient Circuit (2022), the subtle uses and recurrence of various hues of green and orange engage the motifs of lime and tangerine playfully. A deliberate decision by Chan, these specific colors are selected as signifiers, which pertain to particular mass images or regional histories: orange is closely associated with the outer shells of spacecraft, spacesuits, and parachutes, on which the bright pigment is visually alerting; whereas the green shade recalls the interior wall painting of the typical local cha chaan teng (Hong Kong-style café) during the late 20th century.

At the far end of the gallery space, a small pale absinthe-tinged room evokes the memories of Hong Kong’s past around Chan’s generation—arriving here, one may feel as if having reached the last stop of a long journey, enveloped, and then teleported to another dimension. Inside the room, Tri-hexagon Antennae (2022) consists of two sculptural copper assemblages separately installed on two opposite walls. Each made of three mobile rods with hexagonal plates attached onto the tails, the assemblages reference the shape of NASA’s James Webb Space Telescope. In contrast to the room’s overall conjuration of an intimate, enclosed, and nostalgic locale, Tri-hexagon Antennae elicits adventures into the expansive cosmos.

Melding cosmic imagery, ritualistic forms, and personal memories in her practice, Chan siphons poetic meanings and connotations from both humanistic and scientific explorations of outer space to reflect on recent global upheavals in both nature and sociocultural infrastructures. Ultimately, envisaged here in the exhibition is a hopeful future in a parallel universe.

About the Artist
Tap Chan (b. 1981, Hong Kong) is an artist whose practice spans installation, video, and sculpture. Probing the ambiguous boundaries between fiction and reality, Chan explores the ideas of liminality and duality embedded in daily life and fabricates a physical and ideological space of uncertainty in her works. Often juxtaposing a pair of similar objects in one setting, her works evince an active meditation on the multifaceted nature of the visual reality, bringing together both macro and micro universes with metaphors, parodies, fantasies, and imagination. She is interested in grasping, translating, and articulating the near unconscious state induced by and experienced within psychic and emotional ruptures. In an effort to construct a psychoterratic narrative, Chan brings forth the continuous interweaving between the imaginary and the real, evoking an unease with the collectively nihilistic mentality in contemporary society.

Chan received her BFA in Sculpture from the Royal Melbourne Institute of Technology in 2012 and her MA in Visual Arts from Hong Kong Baptist University in 2014.

The artist currently lives and works in Hong Kong.

About MOU PROJECTS
MOU PROJECTS (formerly known as MINE PROJECT) is a Hong Kong-based contemporary art gallery established in 2019. Since its inception, the gallery has been dedicated to showcase both local and international emerging artists working in all media and has held many of their first solo exhibitions in Hong Kong as well as in Asia. With an aim to facilitate artistic dialogues and conceptual innovations, the gallery supports artists whose experimental practices and boundary-pushing ethos reflect the current social reality and manifest an alternative contemporary aesthetics.