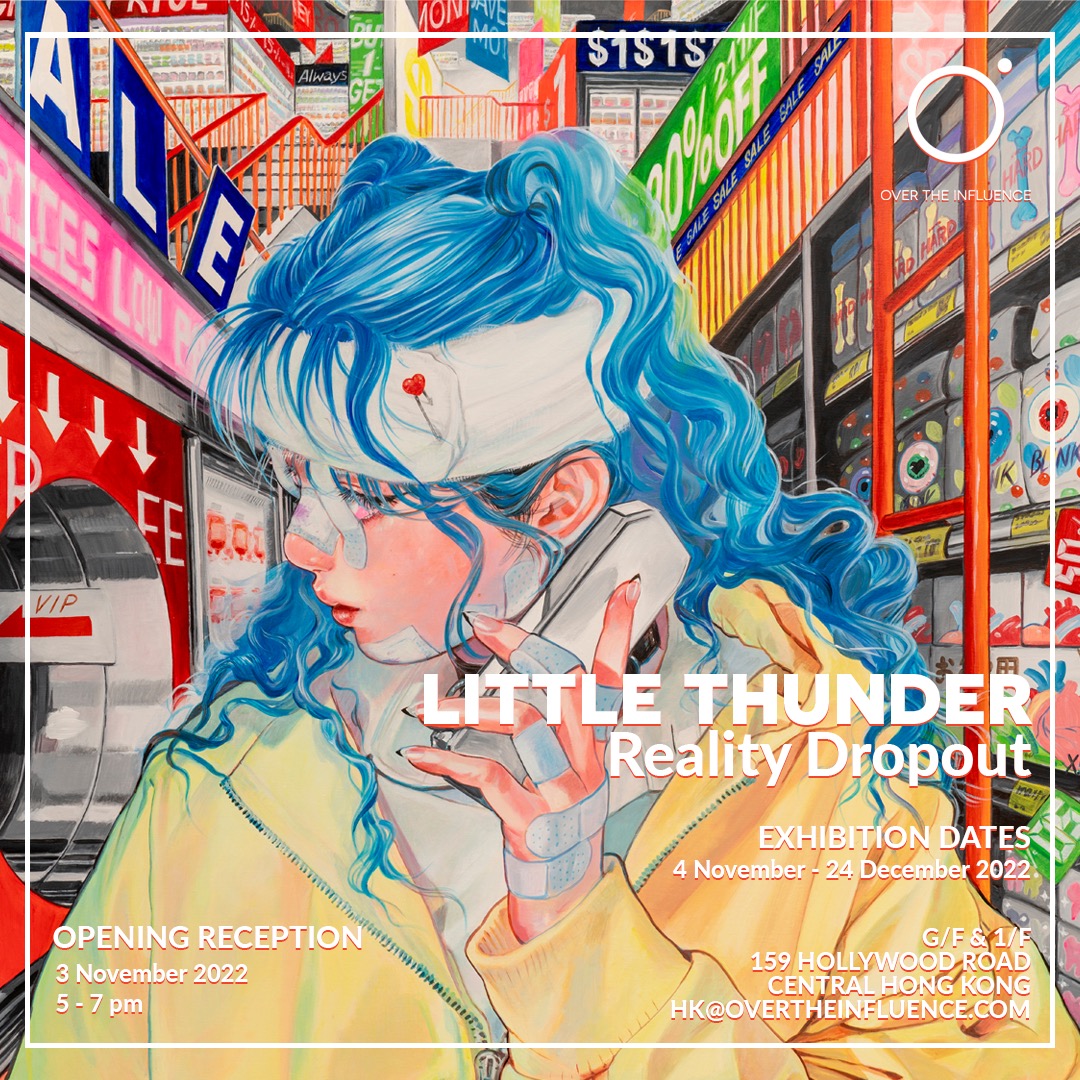 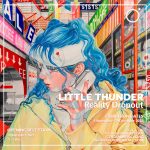 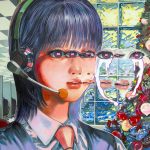 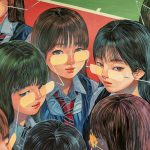 Over the Influence Hong Kong is excited to present Reality Dropout, the first solo exhibition of Hong Kong-based artist Little Thunder with the gallery who is highly acclaimed for her manga-inspired illustrations and artworks. The exhibition showcases a new body of work that articulates a breakthrough approach to her artistic practice that debuts 12 canvas paintings.

Little Thunder’s oeuvre is heavily influenced by manga aesthetics where humanity is depicted in a series of magical realist circumstances and interactions. Brightly colored and cartoonish, the images invoke another type of reality where the fantastical, the cognitive, and the visceral all take their own forms to communicate on another plane of existence.

“The name of the exhibition Reality Dropout means to withdraw from ‘reality’. It is about seeking the truth and peeling it back layer by layer and realizing the lines between reality and the imagination is only getting blurrier”, the artist said.

“Everyday life is absurd. I want to depict womanhood as if nothing is happening, while in fact everything is happening around them. People constantly seek the ‘truth’ beyond absurdity, but then realize it is beyond anyone’s comprehension”.

This desire to capture the banal absurdities of ordinary life can be found in the painting Closer Than You Thought that shows a female operator who is distracted and not focused on her work. The parallel mirroring of her face and facial expression as a separate entity shows how the woman is engaged to something on the screen. For her the ‘real’ space she inhabits is meaningless. The vivid colour palette contrasts with the enigmatic surroundings, further highlighting the woman’s emotions and erratic energy.

Little Thunder began drawing manga illustrations when she was 8 years old. However, it was in 2001 when she began creating manga seriously and her works featured in numerous international publications. Her work is widely recognised in manga communities. Reality Dropout is the first time she has expanded her creative outreach to make paintings from her illustrations. The new series of paintings brings the same level of storytelling she is celebrated for and repurposes them onto canvas and invites viewers in to decipher the scenes at hand.

The artist’s visual vocabulary is akin to famed Japanese artists Yoshitaka Amano and Tetsuya Ishida, for both these individuals embrace storytelling and surrealist aesthetics to have their paintings come to life. Within the landscapes in each of Little Thunder’s paintings there is a keen sense of connecting to a great schema of things for the imagination is vast and the people who inhabit her works have manifested their own environments with the power of their minds.

In Reality Dropout it is the stories that arrest the viewers and have them stop to contemplate each painting. Free Will Is A Trend slyly plays with independent thinking versus communal governance. “Everyone’s wearing the same pair of glasses, but looking in different directions”, the artist explained. “Likewise everyone seems to live with freewill, but in actuality how many of them is fully instilling this belief?”

In the artist’s world people are haunted by their expectations, dreams, desires, and fears. It is a landscape fraught with innuendos and mysteries. Absurdity holds reign and within this landscape it is the imagination that is able to ground people amidst the external influences. Yet there is hope to be found within the vibrant colours and restlessness that occupies each work. There may not be a perceived ending in each story, but there is gleaned a definite sense of purpose to each individual’s actions as seen in the paintings: They wish to survive and rise above it all. Reality cannot limit their dreams anymore.