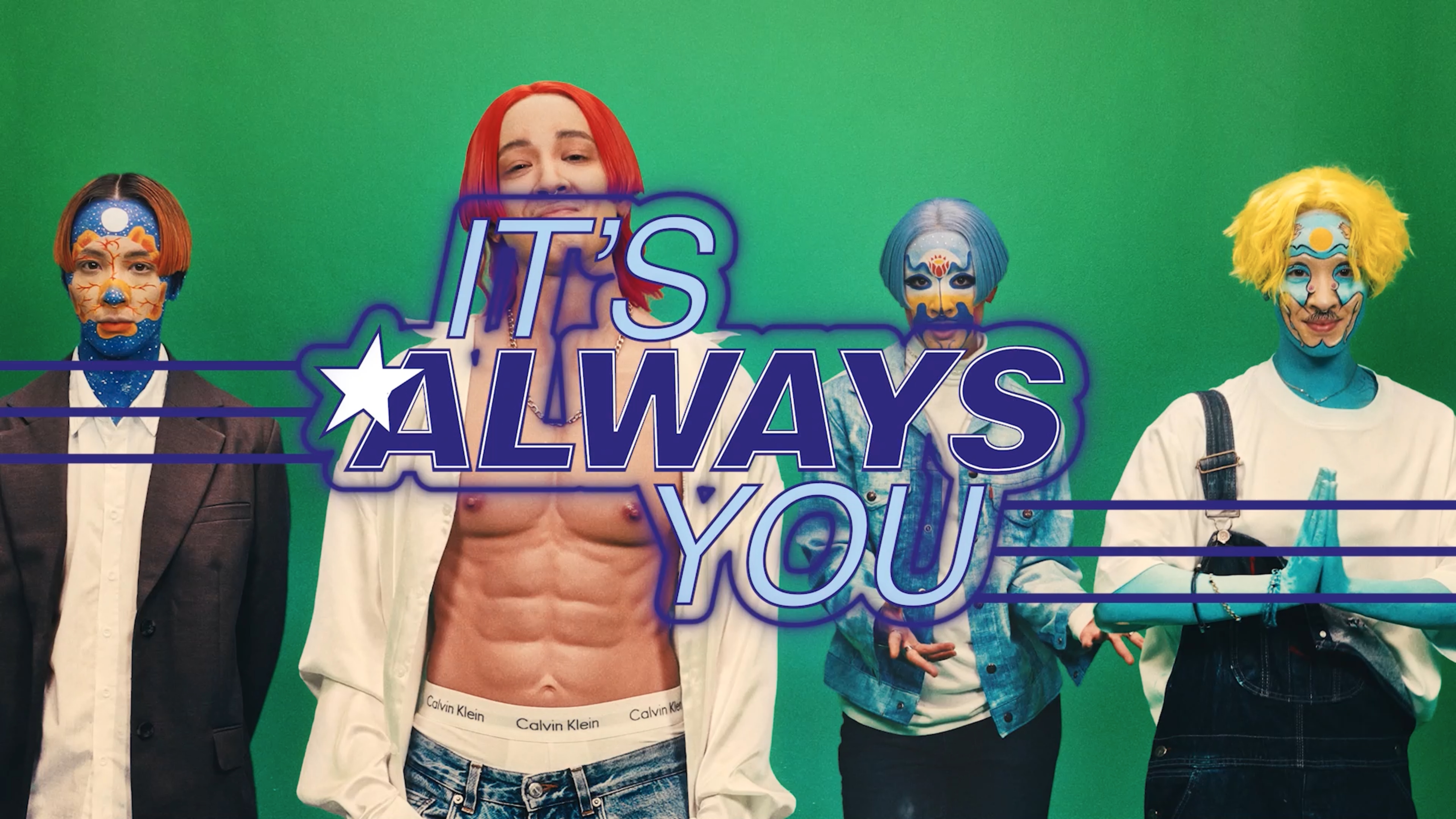 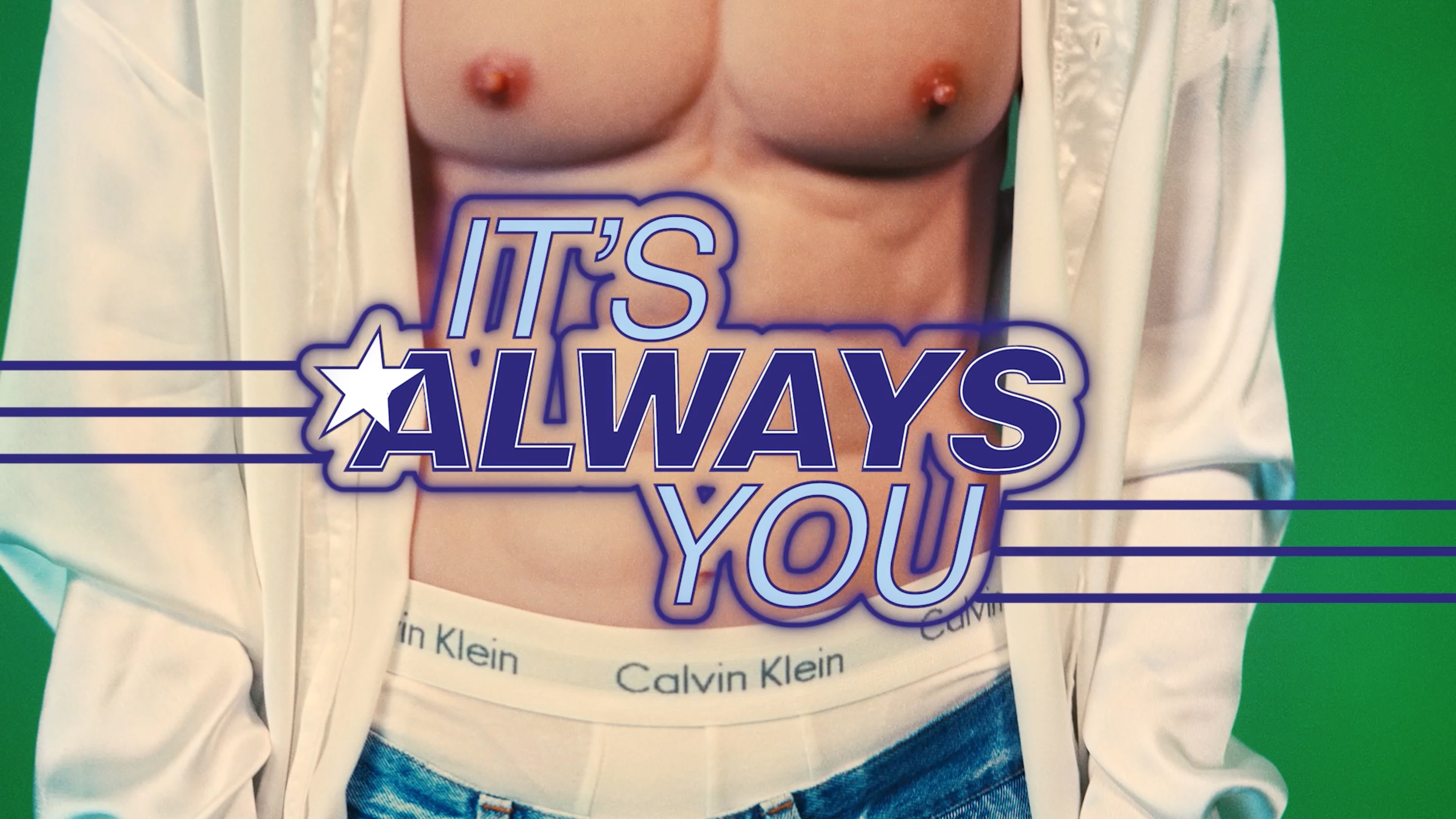 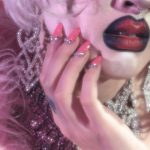 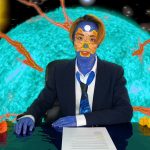 Blindspot Gallery is delighted to present It’s Always You, Sin Wai Kin’s first solo exhibition in Asia. Presenting works never previously shown in Hong Kong, chronologically from 2016 to 2021, this exhibition traces the creative journey of the artist, who again and again reinvents themselves to hold multiple identities, and to shift between different ways of being. Encompassing film, face wipes, performance, texts, ephemera, Sin’s practice embraces a breadth of material and gender expressions and the worlding of alterity. The manifold journey of It’s Always You manifests the perils and joys of naming, the cycle of birth and endless rebirth, the inevitability of change, and the ease and grace of metamorphosis. Sin Wai Kin is a carrier bag, a gatherer and forager of characters, dances, fictions, truths, histories, and possible futures.

Narrative Reflections on Looking (2016-2017) marks an important development in the practice of then-named Victoria Sin, who started integrating fictional film narratives into their established club-based drag performances. The four-part series comprises staged scenes where Sin poses in glamorous drag regalia, as the camera moves sensuously in close-ups of their body. In a first-person voiceover, Sin guides the experience of looking and identifying with the images in real time, troubling the space of desire in the process of identification. Sin shows that there is no innocent looking, that our relationship to images is promiscuous.

These images stand as ontological doubles that demand to be looked at, just as they look back at viewers with equivalence and indifference. Enshrining these looks are make-up removal wipes documenting the faces Sin painted for a character. Shroud of Turin of sorts, each of these masks is the artefact of its own death. To give birth, something must be laid to rest.

A Dream of Wholeness in Parts (2019-2021) marks a cinematic turn for Sin. The poetic epic unfolds into a mytho-realistic dreamscape, inspired by famous musings of foundational Taoist writing, such as the “Butterfly Dream” and “The Death of Wonton” by Chuang Tzu. In the mediation of Chinese metaphysics, Sin debunks the Aristotelian logic and categories that produce the false dichotomies in our world, such as self and other, waking and dreaming, male and female, fragments and totality, life and death, fantasy and reality.

A Dream of Wholeness in Parts marks the beginning for Sin’s weaving of traditional Chinese dramaturgy with contemporary drag, music and poetry, in order to queer genres and categories while cultivating a space for imagining different worlds and new ways of being. At the core of this experimentation is the birth of The Universe, face painted with a lotus flower rooted in the earth flourishing towards the stellar, a character in the Cantonese opera tradition of Jing role known for their lyrical singing and martial arts. A Dream of Wholeness in Parts was produced by Chi-Wen Productions and supported by Hayward Gallery Touring and Soft Opening for “The British Art Show 9”.

Inspired by the skillfulness and fluidity in which Chinese opera singers put on myriad gendered roles, Sin intentionally turns to masculine drag, along with the recent announcement to return to their gender-neutral Cantonese birth name, Sin Wai Kin 單慧乾.‬ (formerly known as Victoria Sin). The artist describes this turn as one of “trying things on, rather than taking things off”. While Sin’s drag queen persona stripped bare the expectations of femininity and its relationship to womanhood, their drag king modality evolves space to experiment and play with fantasy in masculinity.

In the plague year of 2020, their journey takes them inwards into the rigorous imagination of the mindscape in virtual backgrounds, giving birth to a plethora of characters. Irreconcilable Differences (2020) shows The Clowns, two feminine characters, one in Western dress and one in Oriental garment, engaging in a non-linguistic argument. The meaningless enunciation couples with reproachful and scornful body language, and enumerates many a pointless squabble that sees no reconciliation, an apt reflection of current affairs in the world. Irreconcilable Differences premiered at the ICA London, and was recently awarded the B3 BEN Award for Best Immersive and Time-based Art.

Today’s Top Stories (2020) features a news reporter in intergalactic cable television, giving simultaneously true and false, real and fictional accounts of a quantum universe as a proto-star gestates in the background. The newscaster is The Storyteller, with his face mimicking an imploding red giant star, debunking all boundaries between being and non-being. Today’s Top Stories was commissioned by the Tank Art Museum, Shanghai, as part of the exhibition “More, More, More”.

The One (2020) features Sin deep in meditation, eyes shut, stationery, breathing. With the sun disk as his third eye, the outline of the body is relocated to the face, and the mouth stands in for every orifice, redefining and eroticising the limits of the body. There is no more division between self and world, mind and body, individual and context. The One originally appeared in “The Many Faced God/dess” (2021) commissioned by Maison Populaire, Montreuil.

Synthesizing all these characters and selves, Sin creates It’s Always You (2021), a four-piece boyband comprising of The Universe (the pretty boy), The Storyteller (the serious one), The One (the childish one), and Wai King (the heartthrob). Sin hyperbolizes the ontological paradox of boybands, where individuals exist in integrity with the collective. The phenomena of boybands highlight how identities are strategically commodified for mass consumption, how queer codes subvert and trouble within the matrix of heterosexual language, and how boybands contain the promise of love, fantasy, and collective escape.

Visitors are promised the full fangirl/boy/by experience, flush with ephemera and merchandise. Lifesize cut-out boards of the four characters greet viewers with ample photo opportunities (#itsalwaysyou2021 @sinforvictory). Perspex-framed posters signed by respective members are must-have collectibles for all loyal fans. And a dual channel installation including karaoke style lyrics for viewers to sing along to features the Boyband’s hit single, “It’s Always You”. This project is jointly commissioned by Blindspot Gallery and Shedhalle, Zurich, and was first exhibited in Shedhalle, Zurich as part of the group exhibition “Protozone 4: Extra Worlding” and later Frieze Focus, London.

The artist will be present at the opening reception, and will give a short performance titled His Story about You, specially conceived for this exhibition. Sin will take on the role of The Storyteller, their first time giving a live performance as a masculine drag persona. Born of inarticulable narratives, The Storyteller invites you to an intimate story circle about the agency of storytelling within binary discourses.