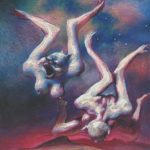 “Infinity” is the second time that Xia Xiaowan has collaborated with Tang Contemporary Art on a solo exhibition, following his “Rotation” retrospective at the Beijing Minsheng Art Museum in 2015. Curated by Cui Cancan, the show will present Ark, Xia Xiaowan’s latest large-scale pastel work, paired with selected series from the 1980s to now, highlighting the eternal themes, boundless vitality, and diverse artistic explorations that have characterized his 40-year career.

Ark was inspired by the biblical story of Noah’s Ark, which engages with the continuity of life and the hope for redemption. Xia began Ark in 2019, working on it over the course of a year and finishing it just after the pandemic began. As one of his most important works from recent years, Ark is stylistically rich and takes on a grand theme, which happens to relate to the present moment. The nearly one hundred living things depicted in the work appear to grow independently, but they also evolve from and shape one another, fusing into a single whole.

Once a marginal medium, pastel has been given a new lease on life in Xia Xiaowan’s work; it has now become a distinctive and important medium, with characteristics that echo the artist’s creative intent and the subject of the work. Its powdery ambiguity creates indeterminate boundary lines, transitions between figures, indistinct shadows, and elegant highlights. The medium suits Xia Xiaowan’s pursuit of endless distortions and the equivocal growth of his forms. With these diverse, entangled forms, the effect of the pastel is decidedly different from the coverage offered by oil paint. The light, translucent colors of pastel give the figures more dimension. The whole picture can be inferred from any detail, and details can generate further details—something minute can unfold into infinity.

The relationship between subject matter and structure has been an important focus of Xia Xiaowan’s work in recent years. In more traditional art, the subject matter would determine the creative methods, narrative structure, and modeling relationships used in the work. Structure was intended to better elucidate the subject. Realism had its own approaches to structure and modeling, and classicism had its own tools and methods. Xia attempts to alter past constraints on subject and structure, reconnecting realities, subjects, stories, structures, and modeling. Ark is no longer intended to better tell the biblical story; it is just a prologue to his index of experiments with structure and modeling.

For Xia, the story and the structure are parallel forces in the work; they determine and generate one another. Experiments with structure bring about new stories, and changes to stories generate new structures. He does not want to abandon stories and realities to become a formalist that works with pure abstract structures. He has never forsaken the classical spirit, but he does not want to become an artist whose goal is to illustrate stories and concepts, someone for whom structure, modeling, and medium are tools of subject matter. For him, the shortcomings of reality or the paucity of imagination could be related to ossified stories and subjects or to monotonous structures and modeling.

Classic characters and stories such as Noah’s Ark, Xingtian, and Guanyin, as well as his 1980s themes of heaven and earth, mother and son, sun and moon, and wastelands, are motifs that he constantly revisits in his work. However, as a key figure in the contemporary revolution in Chinese classical art since the 1980s, Xia Xiaowan’s work never stopped with classic stories; he has an expansive body of work covering a diverse array of themes and categories.

His broad-based subject matter has spanned personal life experiences, mythology, and the histories of Eastern and Western civilizations, reconnecting the classical and the contemporary. He has also experimented with a range of mediums, including oil painting, drawing, pastel, sculpture, and painting installation. In his idealistic Wasteland series in the 1980s and his self-reflections in the 1990s, he found freedom and transcendence within his own life; his later spatial paintings engaged with visual experience, viewing perspectives, and the history of forms. In the course of his career, Xia Xiaowan has blended dreams, hopes, illusions, and realities, immersing himself in them. His art is permeated with the ambition to break through the boundaries of painting, pursuing and applying all of the possibilities of this freedom.