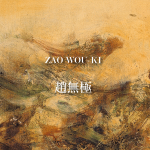 To be officiated by

Mrs Mignonne Cheng, Co-Chairman of the Board of French May Arts Festival

Alisan Fine Arts is honoured to announce its 5th solo exhibition for renowned Chinese-French artist Zao Wou-Ki (1920-2013).  Tracing Zao’s extensive career are works from 1950s-1990s and include oil paintings, ink paintings, watercolours and prints.  This exhibition is the last in a series that the gallery has organized to marks its year-long 40th anniversary celebration. Also, on display are a selection of archival material highlighting the longstanding friendship between the gallery and artist.

Zao was born in 1920, Beijing into a scholarly family and studied at the National College of Art (now China Academy of Art) in Hangzhou under Lin Fengmian (1900-1991), the pioneer of modern Chinese painting.  In 1948 he left for Paris where he spent most of his artistic career. In 1951, in the museums in Bern and Geneva, Zao discovered Paul Klee’s paintings, whose works influenced him greatly. He further explored the works of modern artists from Klee to Picasso and Dubuffet to Pollock and observed how they were engaged in the search for the origin of creativity. This discovery led to his change from figurative to abstract. Working mostly in Western medium for the next 20 years, it was not until 1971 that the artist returned to ink painting. In 1993 he was awarded the Commandeur de la Légion d’Honneur, and in 2006 he was made Grand Officier de l’Ordre de la Légion d’Honneur. He passed away in 2013 in Switzerland.

The gallery began showing Zao’s works in 1983, before he was well-known in Asia, as part of a group exhibition Contemporary European Artists, and since then has held four solo exhibitions for Zao. The gallery held his very first selling exhibition in Hong Kong in 1993, in conjunction with the first Le French May Festival, featuring works in Chinese ink on paper and oil on canvas. This was followed by a solo exhibition in 1996. Although oil painting was to become Zao Wou-ki’s primary medium and the source of his worldwide renown, he also experimented in printmaking, Chinese ink painting and watercolours. In 2003, the gallery showcased a series of Zao’s rare early oil paintings and watercolours, the same year an important retrospective was held for him at the Galerie Nationale du Jeu de Paume in Paris. Then in 2009, Alisan organised Celebrating Zao Wou-Ki, which included a collection of Zao’s oil paintings, watercolours, lithographs, etchings, and ink works, executed between 1949 and 1994, providing an overview of Zao Wou-Ki’s artistic development from the early poetic figurative work to the later meditative abstract compositions. Each show accompanied by a printed catalogue.