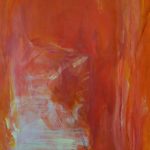 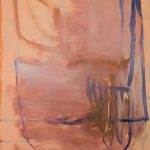 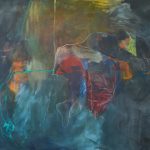 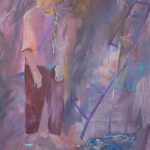 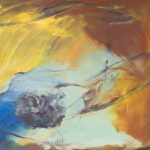 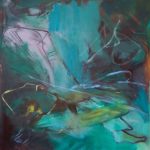 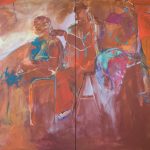 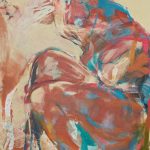 MOU PROJECTS is pleased to present “Pause, Arise,” Zhong Tianyue’s first solo exhibition with the gallery as well as in Hong Kong. Featuring a selection of paintings that evolve from figuration to abstraction, the exhibition displays a poetic, painterly investigation of historical records and beliefs, showcasing how the artist slowly and generously unfolds her informed perceptions and constructed impressions.

In her figurative works, Zhong re-enacts histories and re-examines the definition of historical documentation—it is more than a recount of what happened but an exploration of the capacity of histories to inform one’s epistemology and therefore affect the individual perception of the self and the present reality. Orange II (all works 2022) resurrects the scene in Making Braids (c.a. 1902–05)—a historical photograph showing four figures dressed in cheongsam, each braiding the iconic Manchu queue for the person in front, while Bury in Twilight II draws inspiration from Two Men on an Opium Bed (c.a. 1902–05) in which two men are seen smoking opium, spiritless and dazed, recalling the havoc wreaked by The Opium Wars in the late Qing Dynasty. Under Zhong’s depiction, certain definitive contours of the figures are softened or distorted to blur the boundary between the foreground and the background, evoking characters recalled or imagined.

For Zhong, these historical photographs, taken by foreign missionaries during the early 20th century, are snapshots of the era, plucked from fragmented historical documentation and now paused, frozen, and transmuted on the canvases. As the artist’s personal temperaments and dispositions are translated into a keyboard of color, scrutinized is the waning of the contemporary senses toward both personal and shared histories.

If the figurative works denote the processes of re-examining historical records and looking outward, abstraction is thus the outcome of Zhong’s endeavors to turn inward, illuminating and distilling some impressions extracted from her figurative paintings as well as her memories. Sad Purple Jade I & II enclose the artist’s encounter and sublimation of a poem attributed by You Tong (1618–1704) to his friend Dong Yining (1629–69), which narrates stories about a tobacco-smoking beauty in a brothel. Here, figures are no longer recognizable and instead broken down into lines and marks that brim with the bursting of raw emotions. A painting with a similar palette to the two works, I See Fire, Reaching to the River comprises various hues and applications of oxide red, rendering this earthy tone organic yet roaring. To Zhong, the motif of fire is closely associated with the expressive signage of emotions, the elements of which remain unchanged and timeless. Beneath and beyond her visually dramatic palettes and viscerally embracing gestures lies Zhong’s awareness toward the subconsciousness vis-à-vis its imperfect, partially fabricated, and yet fantastic nature.

Encapsulating the re-enacted historical eras and her contemplative wrestling with the passage of time, painting, for Zhong, entails ceaseless upward movements in a metaphorical and phenomenological realm. In between these sometimes rapid, loose brushstrokes and other times layered, loaded pigment, made explicit is the artist’s persistent and ongoing journey for understanding the self in relation to history, which has the power to transcend the re-enactment of the past and consequently yield sufficient invigoration for the future.