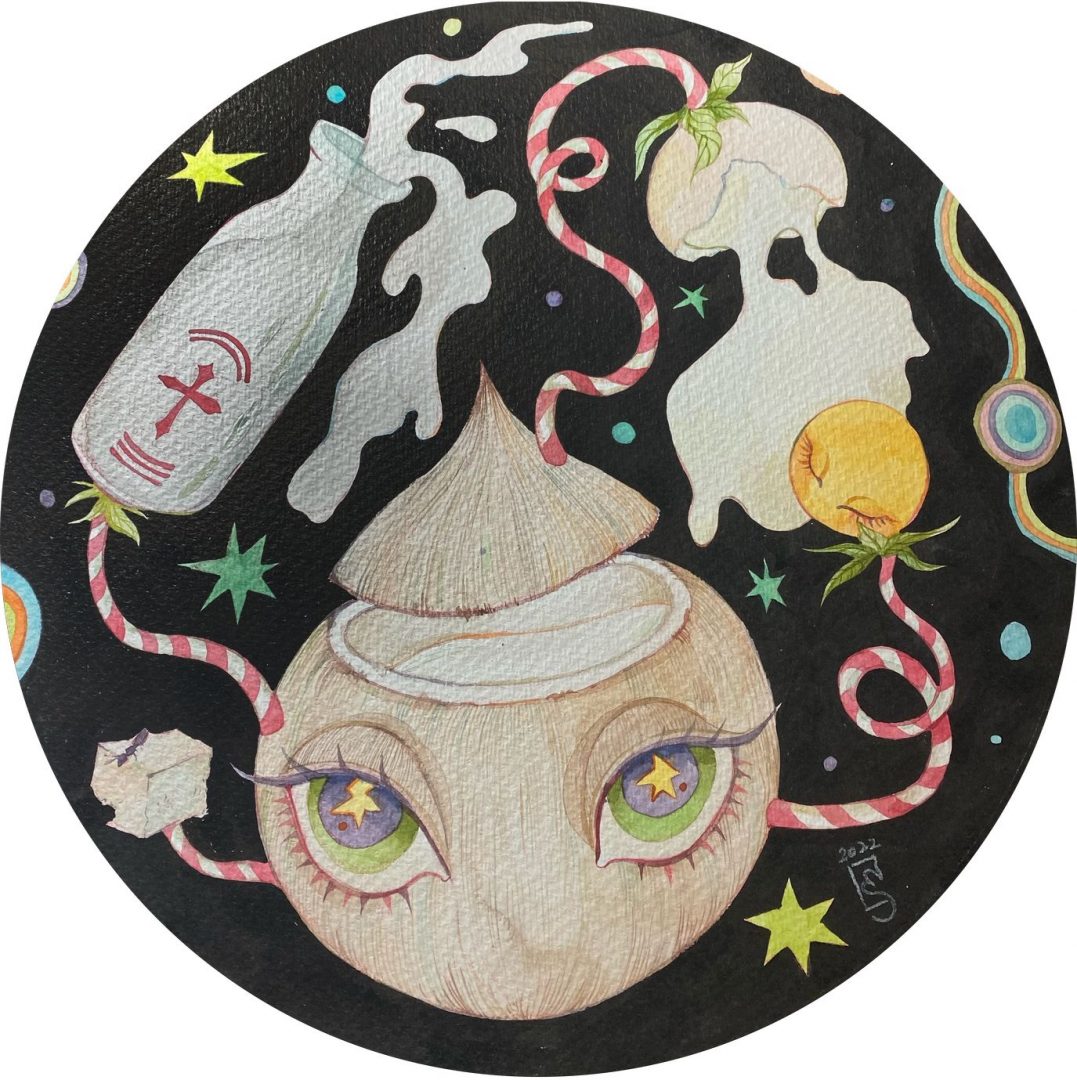 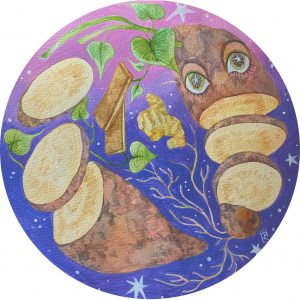 Have a Rice Day

Alisan Fine Arts – Aberdeen is excited to announce the first solo exhibition for young Hong Kong artist Charlotte Mui this summer. For this inaugural exhibition, Mui will be showing a new series of paintings that were inspired by her mother and grandmother’s home-cooked dishes. Mui makes use of vibrant colours and personified food subjects to depict her family delicacies such as coconut stewed milk, tomato tofu soup, and turnip cake. In particular, the pair of cartoon style eyes visible on the ingredients offers each work a reminiscence of the domestic atmosphere. The canvas has also been deliberately cut into a circular shape to resemble the look of a plate, making the piece more like a family dish in terms of presentation. Mui’s unique visual representation demonstrates her identity as a Millennial artist, who combines pop culture, cartoon, and down-to-earth themes in the making of Surrealist artworks, which are often associated with the complexity of philosophical ideas.

Mui’s popular Tarot card series received sell- out success last year at Alisan Aberdeen. The paintings were included in a group show “Chinese Surrealism”, which was also part of the French May Associate program.

Born in Hong Kong in 1996, Charlotte Mui is an emerging artist working mainly in watercolours and digital. Her work often reflects her own experiences, visions, and dreams while drawing inspiration from mythologies, art history, theatre, popular culture and home. Although Mui did not receive formal art training and instead studied English Literature and Art History at the University of Hong Kong, obtaining her BA in 2018, she has always enjoyed painting and as a child has won numerous international and local awards for her work. After a decade of painting competitively, Mui continues to search for her own voice and mode of expression. In 2020, she completed and created her own deck of Tarot cards, “L’Œil de L’ me Tarot”, which she uses exclusively for her fortune-telling endeavours. Mui is currently working full time at Asia Art Archive. She is selected as one of the young artists to create murals for HKWalls Mentorship Programme 2022. Her Tarot card series has been recently been collected by Tate Library in the UK. 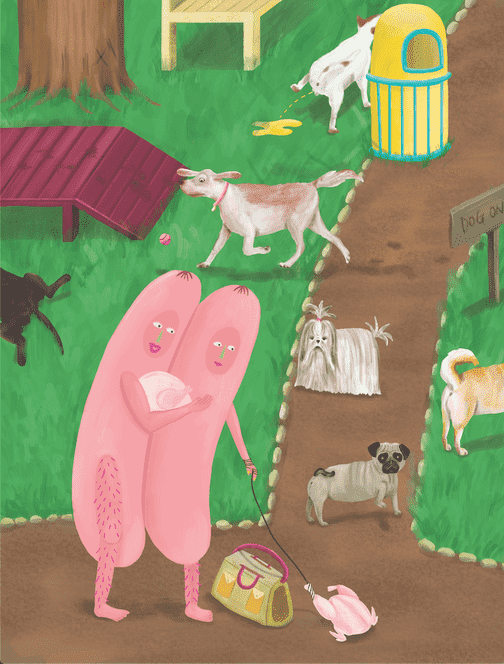 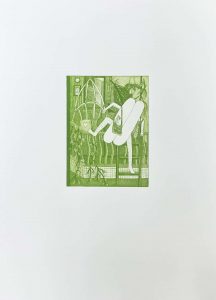 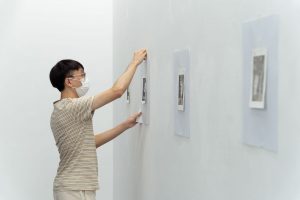 de Sarthe is pleased to announce its sixth annual de Sarthe Artist Residency (deSAR) as well as its resident artist, Eugene Lun (b. 1998, Hong Kong. Lives and works in Hong Kong). The artist will create new artworks using the gallery as his studio, which will be open to the public during normal gallery hours throughout the duration of the residency. deSAR runs from 9 July to 16 September 2022 and will culminate in a 2-week exhibition.

Lun’s creative practice investigates the invisible boundaries in daily life; the unspoken rules put forward by the pressures of social conventions and norms. Contemplating this notion under the context of his residency, Lun will transform the space into a whimsical playground-like setting that defies the formal experience of visiting a gallery. In conjunction to physical interventions, he will also create an entirely new series of Augmented Reality (AR)-infused paintings, prints, and installations that feature an eccentric cast of comedic sausage characters.

Through overtones of humor and absurdity in both his imagery and design of the space, Lun aims to challenge not only the conventional etiquettes of gallery-visiting but the traditional modes of artmaking as well.

Eugene Lun was born in 1998 in Hong Kong, where he continues to live and work. He graduated from Hong Kong Baptist University with a B.A. in Visual Arts in 2021. 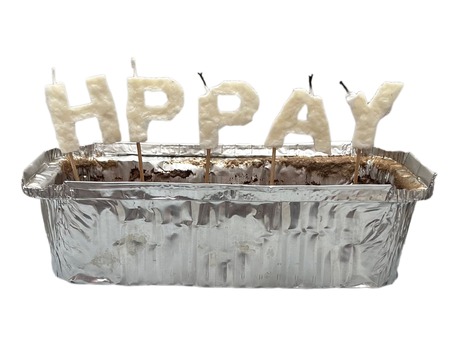 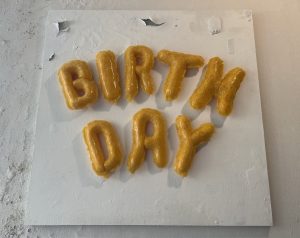 We are proud to showcase artist Go Hung’s first solo show with our gallery. [uk1] [lau6] [pin1] [fung4] [lin4] [ye2] [yu5] is a new body of work which spotlights the underprivileged members of society and their daily challenges in a post-Covid environment. Although this show is rooted in Hong Kong, its central theme reflects a global phenomenon.

Go Hung (HK, b.1980) received his BA in Digital Arts and Creative Advertising at Thames Valley University, UK and MA in Visual Arts from University of the Arts London, UK. He has also participated in artist residency programmes in Denmark and Iceland. Recent exhibitions include ‘disCONNECT HK’ in HK (2020), ‘Classic Craft, Modern Meaning’, Hong Kong Tramways (2020). 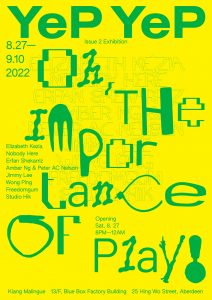 Group exhibition, Brushstrokes and Beyond

“One-stroke contains the universe and beyond; thousands and myriads of strokes and ink all begin here and end here, waiting only for one to take advantage of it.” Shitao

In a treatise on painting titled, Huayulu (画語録), Chinese painter, calligrapher, and philosopher of the Qing Dynasty, Shitao criticises the establishment and seeks to convey something more primal in a painting — a single, holistic brushstroke. Shitao’s work proclaims that the artist should be able to show the universe in a way that one profound line integrates everything, embracing the artist’s mind to the body then to the brush and finally to ink, to achieve their spiritual nourishment. One stroke should even reflect the artist’s moral cultivation.

The group exhibition, Brushstroke and Beyond, exemplifies artists’ self-cultivation by demonstrating their unique visual expressions to further elaborate how one stroke can extend beyond their limitations. The works of eight artists — Yun Hyong-keun, Masatoshi Masanobu, Lee Ufan, Raimund Girke, Shen Chen, Michel Mouffe, Shiro Tsujimura, and Hong Kong artist Pong Yu Wai — are focussed on their expansive approach to creative language gestures, such as scribble, line, and calligraphy. The gallery invites Pong Yu Wai to participate in this exhibition as part of the Hong Kong Gallery Association’s Summer Program, an annual project that features the local art scene to create a positive impact on the new talent within the community.

Pong Yu Wai (b. 1982) has developed his oeuvre with ink from a ballpoint pen on paper, spinning the thread of his emotion and mind continuously with one line as it multiplies rhythmically. His lifelong drawing work, “Rhythm of landscape”, is a 12-by-2 metre scrolling paper hung from the ceiling, which dominates the gallery’s main room. It represents his personal response to Hong Kong’s current social circumstances amid the city’s rich history. A collective force is depicted by drawing very fine and thin lines, yet Pong Yu’s visual language is as fluid as water, gently showing the ephemerality of the universe. During the exhibition, Pong Yu extends his studio to the gallery, continuing to create the work every day. 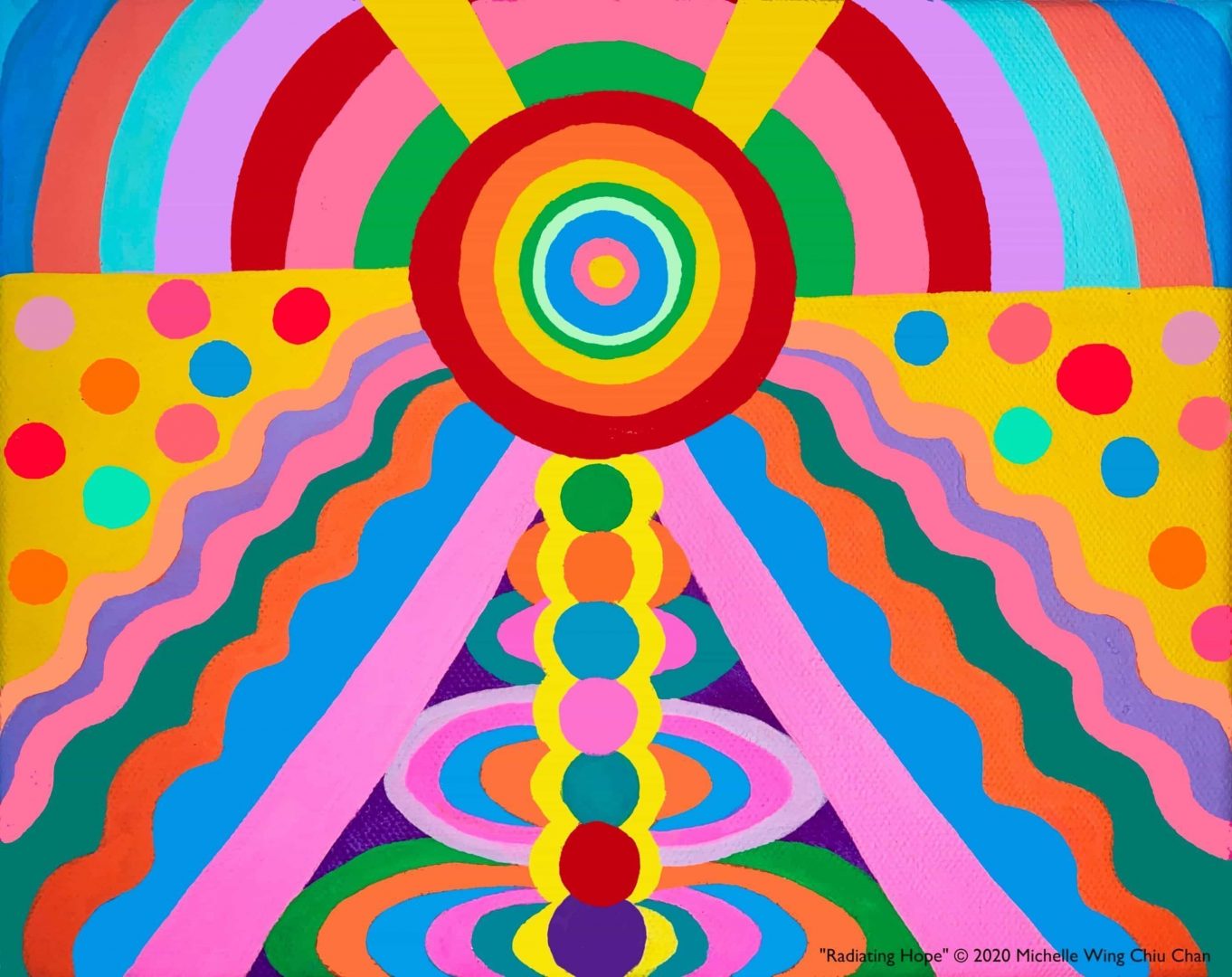 An unpredictable and irresistible epidemic has changed our lives and the world seems to have hit the stop button, suspending everything that we have become accustomed to. Perhaps it will take a bit more patience before regaining the freedom of movement. Nevertheless, by giving the restless heart a moment of peace and by emptying the anxious mind, you will find that healing is never far from touch. In this post-epidemic era, allow us to bring colourful paintings to refill your heart with energy, anticipating the day when the world will return to normal once more.

“I believe that our inner world is a wellspring of resources, full of insights we have cultivated in daily life as well as creativity we can discover, explore and manifest to lead a more joyful, fruitful and meaningful life.”-Michelle Chan

Michelle Chan is a process-oriented artist who creates abstract paintings, writes and composes music. Grown up and educated in Hong Kong and Sydney, she loves to immerse herself both in the serenity and awe of Nature as well as the vibrant and energetic impulses of city life. Her works are imbibed with the sunshine of both cities and they are imbued with energy and great vitality. She completed her Master of Fine Arts (MFA) degree at the Royal Melbourne Institute of Technology (RMIT) with Distinction, after having obtained her Bachelor of Social Sciences (Major: Psychology), Master of Social Sciences (Clinical Psychology), and Doctoral of Psychology (Clinical Psychology) at the University of Hong Kong (HKU). 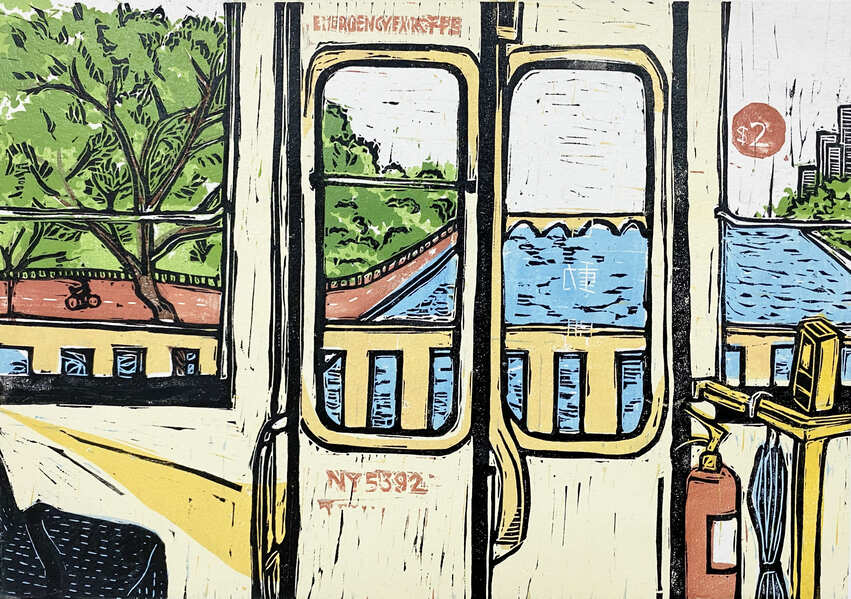 In this exhibition of prints, June Ho narrates the story of her city through scenes of daily life and cultural icons. Hong Kong’s images are more than the skyscrapers by the Victoria Harbour and the bustling scenes of Mong Kok. Hong Kong’s scenery can be focused on the down-to-earth, every day.

June Ho (b. 1990) graduated from the Fine Arts Department of the Chinese University of Hong Kong. She has been involved in several book projects and has previously shown in Hong Kong, Taiwan and South Korea. Taking inspirations from her personal experiences, the artist condenses and reconstructs familiar and foreign sceneries in everyday life to portray her diaspora identity. Her works often depict the complex feelings of indifference, uncertainty, anxiety and attachment associated to her origin and current place of residence. The exhibition revolves around the artist’s memories of everyday life and her experiences and identity. Childhood and family are important parts to everyone’s personal history, and Tong emphasizes the familial relationships that left a lasting influence upon her development as a woman and as an artist.

She engages with her work through the sensory environment and spontaneous physical movements. Utilizing acrylic, ink, charcoal and pastel on canvas, Tong layers geometric shapes through the act of repeating the form as she paints over time. She continues her exploration of intuitive movements by folding and bending the works into sculptural arrangements. The intricate, irreversible characteristics of Chinese painting and calligraphy instigate Tong to fold with determination. Her art is a three-dimensional representation of space and time, exploring an expression of cross-cultural contemporary aesthetics through folding techniques. By experimenting and generating the artworks through a sense of “visual” tangibility, she is manifesting the emotional and perceptual symbolic relationship of body and mind. Each procedure, action, and intention in her process is an amalgamation of visceral expression, as well as a representation of her psychological state at each precise moment.

Born in Hong Kong, during the British reign, a place where Chinese and Western cultures are well blended. Tong’s art practice explores themes connect to her childhood memories, everyday life experiences and identity using painting, installation, sculpture, video, and public art. She employs art as a means for articulating her inner emotionality and psychological landscape. Memory is the cornerstone of her body of work. Tong began to create abstract paintings while studying at art school and her work combines elements of Eastern and Western mixed culture.